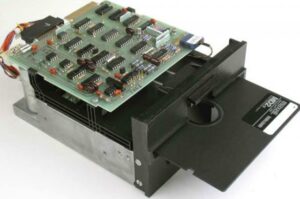 For those of you who have no idea what a “floppy disk” is, they used them in the 70’s, early 80’s, to transfer data between computers. Flash disks and USB sticks did not exist, let alone wireless communication, and the floppies hat a capacity of only 720 KB! To put it in comparison, that would be enough for three middle size PDF files or a 15-20 second MP3 music file.

The storage capacity of an 8 GB USB stick is equivalent to over 1,100 floppy disks.

Nowadays we would call our laptop a computer but everything else around us is just “smart”. To get a picture of what we used to call a computer in the 70’s and 80’s, we just have to take a look at the specs of the first IBM PC.

The first PC that was introduced in August 1981, had 256 KB internal memory, a floppy disk drive, no harddisk and a 4.7 Mhz Intel 8088 processor, we have toys now with more computing power. Even the first super computers, like the legendary Cray-1, had far less computing power than a modern day smartphone.

If it wasn’t so scary it would be hilarious to think that, theoretically the hardware running and controlling part of the worlds nuclear arsenal has less computing power and storage than a normal laptop.

At last, a walking, talking smartphone that can cook