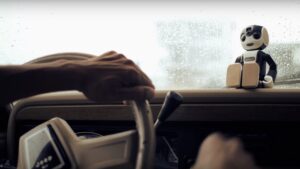 What if we told you that a smartphone shaped like a robot will be available very soon? Yes, you read that right. Sharp has designed the RoBoHon robot smartphone that can talk, walk and even click photos via voice command.

This Android smartphone gets a 2.1-inch display at the back, which is capable of reading out messages to you, or can even call for a cab when the apps don’t work.

In addition, RoBoHon can also show you the clicked images via its built-in projector.

RoBoHon is 19.5-cm tall and weighs around 390-g. Clearly, the phone is neither light nor small enough to fit in your pocket.

RoBoHon is powered by a quad-core Snapdragon 410 processor and offers 3G/LTE connectivity. RoBoHon can also recognise people’s faces using its front camera and can address them by their name.

RoBoHon can also be a handy sous chef, with a little help from the internet of course.

Unfortunately, we don’t know how much the phone costs, or if it can walk the dog and do the ironing but it’s a step in the right direction.

Google wins over Oracle in a $9 Billion Lawsuit