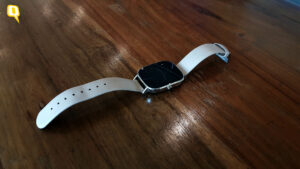 Asus makes phones, tablet, laptops and even smartwatches. The company has been ever-present in the Indian market and now has entered the wearable space in the country with ZenWatch 2. Priced at $150 upwards, this is the least expensive Android Wear device that one can buy at the moment.

But as we’ve seen with most Android Wear watches, it all comes down to the design and construction of the product, as the software running and its features are the same.

The Asus ZenWatch 2 has the right size, the right dimensions, and looks very much a part of the smartwatch clan. Even though most Android Wear (AW) watches offer the same features, it is the manufacturers’ duty to offer a product that fits right in with the user.

The 1.63-inch with 320 pixels resolution may not be as bright as the Super AMOLED screen of the Samsung Gear S2, but for this price, we can live with the concession made by Asus. The watch supports a touch interface which is easy to use and navigate across for various features available on it.

Unlike other smartwatches, the Asus ZenWatch 2 lets you remove the straps with ease. This comes in handy for people who tend to change up their looks often. The watch charges in quick time. The bundled charger ensures that you’re good to go for the day after charging for an hour.

Asus ZenWatch 2 can be charged in quick time.

You can also use the ZenWatch 2 with an iPhone. Now, for someone who doesn’t want to spend too much on an accessory, the Zenwatch 2 stands as reasonably good Apple Watch alternative. You can even change the watch faces on the ZenWatch 2 which most AW devices do not offer.

It’s hard to like the Android Wear OS even though additions have been made to the wearable version of Android. Asus ZenWatch 2 relies on Android Wear apps like every other smartwatch and when it doesn’t, you get the ZenWatch Manager app that doesn’t work to its potential.

The reason why ZenWatch 2 is cheaper than the competition, is because it does not have a heart-rate sensor. This basically pits ZenWatch 2 in the not-meant-for-fitness wearable category. Naturally, due to the missing sensors, installed fitness apps can not funtion properly.

The watch straps could have been better quality. This clearly highlights the reason behind Asus opting for detachable watch straps in the first place.

Asus ZenWatch 2 straps are not the best quality.

And finally, the battery life. I understand that to make the watches lighter, manufacturers are confined to using small size battery units. But this ends up ruining the smartwatch experience for the user. With normal usage the Asus ZenWatch 2 you can barely make it past 10 hours without needing to be recharged. However, iyou can extend the battery life close to 2 days, if you make sure that the watch’s settings are at the bare minimum.

One of the reasons to buy the Asus ZenWatch 2 is that it is cheaper than other Android smartwatches on the market. However, you will miss the heart-rate sensor if you plan to monitor your fitness.

Asus ZenWatch 2 hits and misses because of Android Wear. (Photo: The Quint)

Android Wear gets paired with iOS devices, so that’s another plus point for the ZenWatch 2, but with its average battery life, the bundled charger is going to be a regular partner with you. If that doesn’t bother you much, then ZenWatch 2 will let you make inroads into the world of wearables.