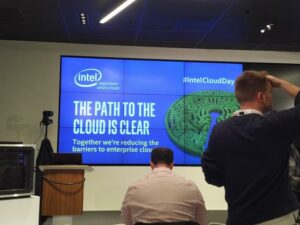 This week was a pretty big week for Intel, they pulled out all the stops to release a new solution for Cloud workloads.  When a market changes often it takes some time for the component makers to figure out what makes the new market very different from the old.   The Cloud has emerged as a very different beast with very different performance requirements than your typical high performance server environment.  It requires far more system agility to handle concurrent and vary diverse processing loads, it requires high security because of the nature of the work and the national and international threats facing every tech industry, and it still requires very high performance and reliability because it has to work like a utility.

This initial announcement includes a very high performance tuned processor, the Intel Xeon E5-2600, and a special 3D NAND SSD drive family optimized to balance speed and very high reliability.  To develop these parts Intel also had to collaborate with a variety of cloud software and hardware suppliers and customers.  This last is particularly critical because many of the cloud service providers effectively build their own hardware and thus are far more intimate with their unique performance and reliability requirements.  For instance, on stage at the event, eBay and NASDQ were showcased as now reporting massive performance gains from these new parts.

Netflix has been able to implement far stronger and far more pervasive encryption protecting their content for license compliance and with the new hardware they are reporting a 2.5x performance increase.

Currently there is about $17.B focused on developing this cloud.  Market expectation are that this market will increase at about a 22% rate so this is a huge opportunity for anyone developing in this space.  As this market and related loads increases Intel identified a bottleneck and that was the lack of a universal scheduler.  So they are collaborating with Mirantis to create an Open Stack solution for this problem.

In addition, Intel is working with VMware to launch a series of Centers of Excellence so that best practices can be shared between providers.  These centers are expected to facilitate proof-of-concept efforts and to particularly focus on cybersecurity to ensure that the resulting deployments are safe.  One of the stated benefits is that 6-month proof of concept efforts have been reduces to a few weeks.

Intel is also working with the Cloud Native Computing Foundation (CNCF) (members include:  AT&T, Google, IBM, and others) to create the world’s largest cloud applications testing cluster.  This cluster will use 1,000 Intel Xeon processor-based server nodes.  The result will be the ability to test and optimize far larger applications than ever before.

Finally, Intel has been massively expanding their Cloud Builders program to include SDI use cases so that customers can better take advantage of Infrastructure as a Service (IaaS) efforts.  This is massive, the list of companies connected to this filled a huge slide with tiny print logos.  This is 1,700 developers in 340 companies to date.

This feels as big for Intel as the launch of the PC was that pretty much created the company.  This is a huge pivot to a very new market and Intel is throwing a massive amount of resource into this effort.  In addition, Intel’s Tic/Toc development methodology suggests there will be another big performance jump in a few months (this was the Tic) and that the speed of advancement will only increase going forward.   For the average user this will mean their cloud services will be higher quality, delivered far more rapidly, and far more reliably.  This particularly will create a far stronger cloud for coming VR workloads which will be critical for the advancement of that market.

We are seeing something new and amazing launched here today, something likely to touch far more people than PCs even did and like any jump like this it may be some time before we fully understand what this means for the market other than a massive coming change.

A weekend on the Moon

How Mobile Technology Is Increasing Your Productivity