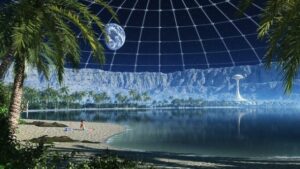 Since professor Johann-Dietrich Woerner has been in his new job as Director General of the European Space Agency (Esa) a Moonbase is getting closer to reality.

When he first started the job he told the BBC

“We should look to the future beyond the International Space Station,..We should look for a smaller spacecraft in low-Earth orbit for microgravity research and I propose a Moon village on the far side of the Moon.

This Moon village should mean partners from all over the world contributing to this community with robotic and astronaut missions and support communication satellites.”

“My intention is to build up a permanent base station on the Moon,”

ESA believes it is possible to start construction on a lunar base as soon as 2020, with robots “printing” the accommodations for the first group of astronauts, who would follow a few years later.

Foster + Partners have joined with ESA to test the feasibility of 3D printing using lunar soil.

“Our industrial team investigated if it could similarly be employed to build a lunar habitat.”

The Uk’s Monolit who has developed and patented D-Shape, a giant 3D inkjet printer for building construction, is also helping the ESA with their lunar village project. The aim is to mainly use local materials for construction to reduce the high cost of transporting building materials to the Moon.

Plans are to build the lunar village near the Moon’s poles. The ice trapped in the craters could provide water and there would be constant daylight, unlike other locations.

The base would be largely financed by Russia, with contributions from Japan, India and China. Jan Woerner visions a resort that would house scientists, prospectors and tourists alike, a permanent base open to all nations around the world, with all countries contributing and participating in the project, regardless of any political differences on Earth.

NASA welcomes the idea, some believe that the lunar base could become a supply station for future missions to Mars or other planets in our solar system.

Ever since man started dreaming of travelling to the stars the Moon has been the first place to visit. Astolfo searched for Orlando’s wits on the Moon and Jules Verne, in his book From Earth to the Moon, imagined shooting people to the Moon with a big canon.

It is a long way until the first tourists land on the Moon, and it is even a longer way until it becomes affordable, so don’t bother packing immediately, but every journey begins with a first step and that has just been taken.

Intel Gets Serious About The Cloud