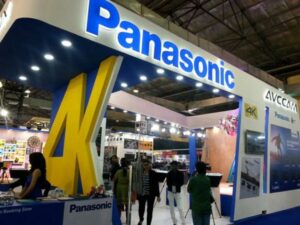 Years ago I flew to Japan for a tour of Panasonic and some background on the firm’s legendary founder Konosuke Matsushita.  Panasonic was one of the few companies founded last century that had a unique focus on customer satisfaction and while they have often struggled with market changes they have never really lost that focus.   When I first started buying my own technology products my favorite brand was Technics which seemed to blend cutting edge technology with pricing that was still affordable into an attractive package.  Panasonic later killed the brand and I was sad to see it go, but last year they brought it back and the end result has been a new class of products I now lust after.

Let me walk you through some of the more interesting products Panasonic launched at CES this year.

Yep that new 65” TV you just bought is now fully obsolete or will be when this gorgeous OLED from Panasonic ships.  OLED initially came out at 15” sizes and $10K for TVs.  This 65” effort should be both far cheaper and far better.  If you haven’t seen an OLED TV be aware it makes every other TV you are likely to see near term look really bad.  This is because OLED had very deep blacks and very bright colors which make traditional LCD TVs look dull by comparison.  These will be high end sets initially but, like LCD was, as panel yields come up prices should drop.   Hmm, I wonder if my wife will let me get her one for her birthday…

Under the Technics brand they are bringing out a stunning 4K Blu-ray player, a vinyl record playing turntable, a full sound system and a streaming music server all with a brushed stainless design language this is an impressive set of equipment.  Completing the setup is one of the nicest looking sets of over the ear headphones, with similar design language, that I’ve ever seen from any company.  Even the new CD player is impressive and damned if I don’t want the new speakers.

Business Class Seat to Die For

Perhaps one of the most powerful demonstrations at the show was the Waterfront Business Class seat.  This gives you Smartphone control of the entertainment experience, a much bigger screen and desk then you’d typically get, and you still get a lie flat sleeping experience if you want to sleep.   I fly a lot and certainly choose a plane that had this seat over one that didn’t.  Even their economy seat is worth switching planes for given its panoramic screen though you’re still stuck with economy leg room.

Denver Is A Smart City

They also announced one of the most comprehensive Smart City implementations in Denver Colorado.  Apparently they won’t just be linking the street lights but the parking spaces as well making it far easier to find an open one.  And they’ll be linking the people with biometrics to medicals services so that if they can’t travel due to weather, something that can happen a lot in Denver, the medical service can digitally travel to them.  Kind of the return to house calls without the trudging through the snow part for doctors.

The funny thing is that the product that I most wanted though was the MX-ZX1800 smart blender.  We have a really high tech kitchen and I couldn’t help but think this thing would look great on the counter and I’m pretty sure at 1200 watts it could likely make me a steak smoothie if I was so inclined (I’m not but I do like smoothies and hate it when he blender can’t handle the load).   Part of their kitchen invasion was their new Cyclonic Microwave with Inverter Technology.  I just became a Panasonic convert on Microwave’s this year and with their last model which does an impressive job of cooking more evenly that prior products I’ve used.

I’ve long been a Lumix fan though, like a lot of folks, have been using my Smartphone more of late.  Panasonic is pushing back had with their DMC-ZS line of 4K cameras at the show.  They are small and incredibly powerful with 30fps movie speeds and 4K resolutions.  I’ve favored this brand for its stellar optics, sturdiness and impressive image stabilization.   They aren’t cheap but if you need that shot it is hard to beat Lumix.  They had three camcorders also in 4K that they announced as well.  What stands out is the ability with some models to do picture in picture recording using a wirelessly connected smartphone, handy if you want to capture two very different actions at once.

One of their most impressive offerings, and I say this having used or covered Smartphone technology since the 1970s, is their Ora Smarthome integration system.   Similar to Intel and Dell’s efforts for business this hub is designed to connect products across a variety of vendors (they announced with Honeywell) so that everything that can be connected will be connected regardless of who makes it.  There is a pretty big race there with Insteon, Samsung, and even Amazon in the chase for a central agnostic solution like this.

Jumping on the large Business Tablet Bandwagon which has recently been a rather hot segment since Apple joined Microsoft there they launched their hardened 12.5” Toughpad FZ-Q1 coming in a value ($999) and performance ($1,699) configurations.   This will go places where the Apple and Microsoft products wouldn’t hold up and if you want a business PC of any type that has to survive Panasonic has long been the leader of products that keep running even in the worst environments.

Wrapping Up:  Panasonic Came To Play

I’m kind of torqued about the Microwave because I literally just bought a new one from them 3 months ago but now am tempted to replace it, love the blender and will likely buy it, will look into Ora more deeply (I have an Insteon home), and really want that new TV for my office but I’ll have to sneak it past my wife.   Oh, and if I can find a plane that has that wonderful seat I’m going to make a huge effort to try and get my sensitive backside into it.   Overall Panasonic did a really impressive job at CES, one of the most impressive parts was their booth configuration which organized the technology like you would use it which I think is a CES best practice.

How To Protect Your Site From A DDoS Attack: 4 Step Protection Plan