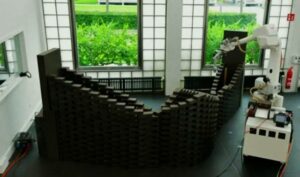 Researchers at the Zurich based NCCR (National Center of Competence in Research) have developed an autonomous construction robot. The In-situ Fabricator will be able to build pre-designed brick constructions under real-life conditions.

The robot is a mobile industrial arm, capable of independently moving around a construction site. Using its sensors and computer algorithms, the robot builds a 3D map of its environment enabling it to calculate its exact position at all times. It can also adapt autonomously to minor design variations.

One of the supervising professors, Matthias Kohler says

“The benefit from an architectural point of view is that you can really design the construction directly, so you can plan for how it is built instead of designing your plan and then that plan afterwards being converted on the construction site. So it actually changes the paradigm of how you design and build quite fundamentally,”

He also believes that the robots will not endanger jobs “I think this will become a game-changer in construction, I believe so. I think that in the next five to ten years we are going to see mobile robots on the construction site, but they’re not going to replace humans. They’ll actually collaborate with humans, so the best of each kind of skills come together,”

Google already has plans to use  “an army of robot-crane hybrids” on its new Googleplex campus expansion.

MX3D, a research and development startup company, will use robots to 3D print a pedestrian bridge across one of Amsterdam’s canals. The versatile six-axis robotic arms will ‘draw’ steel structures in 3D, starting from one side of the canal and building across until it reaches the other end. The robot will also print its own support, which allows it to work autonomously. The location of the bridge will be announced soon and construction is set to commence in 2017.

Robotic construction is not a surprise, it is the natural next step after automated production. The main challenge for developers is to design machines that can adapt to the constantly changing environment on a construction site. Accessing all corners of a site will be a problem too. The future might bring a whole new approach, there are already numerous companies that deliver prefabricated homes that can be assembled in one day. A combination of pre-built modules and 3D printing could be the possible future of construction.

Engineered antibodies may be able to eliminate HIV