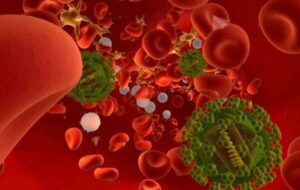 The human immunodeficiency virus (HIV) is the cause of HIV infections which progressively  degenerate the immune system, making infected persons susceptible to common infections which would normally not affect people with intact immune systems. The advanced stage of the infection is referred to as AIDS (acquired immunodeficiency syndrome). There are anti-HIV drugs that considerably extend the life expectancy of patients, but they are not capable of eliminating the virus and curing the disease. This is mainly because the virus hides its DNA in the chromosomes of some white blood cells, making it invisible to the immune system.

Researchers are working on methods to provoke cells harboring the latent virus to reproduce the virus, making the virus visible to thee immune system and allowing the same cells to kill off the virus. The new approach of using bispecific antibodies is promising but challenging. The data is good but there are risks, like the danger that engineered antibodies could cause too much activation of T cells, leading to a potentially fatal, massive inflammatory reaction.

Teams researching  bispecific antibodies have not yet been able to reduce reservoirs of HIV in monkeys, but the researchers are continuing their studies, hoping to achieve their goals in the near future. David Margolis, a virologist at the University of North Carolina, says draining a reservoir ultimately may require combining bispecific antibodies with other latency reversing approaches and immune system stimulators like anti-HIV vaccines.

How black can black get?

Are 3D printers and robots the future of construction