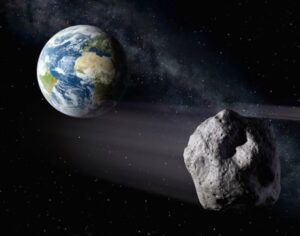 I was still thinking on how to follow up on my The end is nigh article, I think I will wait until there are no more asteroids whizzing past us.

The asteroid will be the biggest close call until 2027, when the 1999 AN10 is expected to fly past us at less than one lunar distance, compared to the 1.3 of 2015 TB145. NASA has assured us that there is nothing to worry about, but addressing the U.S. House Science back in 2013, the NASA administrator Charles Bolden said

From the information we have, we don’t know of an asteroid that will threaten the population of the United States. But if it’s coming in three weeks…pray.

Not very comforting, knowing that the asteroid is 28 times larger than the one that scraped the atmosphere over Russia in February 2013, and three weeks ago no one knew it even existed.

2015 TB145 can be seen on the night of October 30 till dawn October 31. If you should be keen on following the asteroid through the skies, you would need a large telescope, because it does not reflect a lot of light, and you should know where to look. Maybe the following  illustration by Eddie Irizarry using Stellarium can help.

Batman vs Superman production wrapped up and someone killed Doomsday

Google made its first Chinese investment