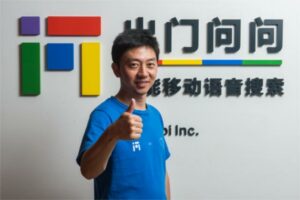 For the first time Google will be investing in a Chinese startup, namely Mobvoi. The Beijing-based startup was founded by former Google employees Zhifei Li and Mike Lei. The company makes a search service, Cumenwenwen, which lets users get directions or order food in a way similar to Google Now.

Google has not had the best of relations with China, there have been tensions with authorities, who shut down the search engine years ago and have since suspended services like Gmail or Youtube in the country. Google is gradually trying to return to the Chinese market, Huawei is manufacturing their latest Nexus flagship the 6P, there are talks of opening an app store and now their first direct Chinese investment.

With a population 40% larger than the USA and Europe combined, China is a highly coveted market, but also strongly guarded against foreign infiltration. Whereas the chinese big players like Baidu and Alibaba, are investing large amounts of money into foreign startups, there is hardly western money flowing into chinese tech firms. The government has the power, influence and money to just ban Microsoft Windows from its computers, giving national companies the chance to gain foot in the sector and replace the foreign competition, when it feels necessary. This makes it hard for companies like Google to compete directly with the locals but now they are cautiously trying it through the backdoor.

NASA has a Halloween surprise for us, the asteroid 2015 TB145

Marty McFly will be arriving today