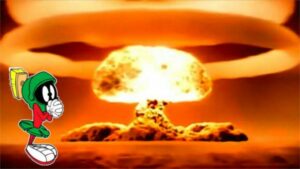 Lately on an American talk show, Elon Musk, CEO of SpaceX and Tesla Motors, suggested we bomb Mars with nuclear weapons, not because he has been traumatized by a recent Mars invasion and wants revenge, but because he was looking for a fast way to warm the atmosphere so that future residents don’t have to live in glass domes.

Nuking Mars might sound insane, but judging from Mr. Musk’s track record, I doubt that he is. The idea is to melt and release the frozen carbon-dioxide on the poles, creating a greenhouse effect, like the one we have on Earth, to warm the planet. Disregarding the fact that we would need thousands of nuclear warheads for the job and that  the radiation would make Mars uninhabitable for centuries to come, what about the martians that we have yet not found.  Musk’s other solution was transporting our surplus CO² to the planet, which might be better than what astronomer Christopher Impey suggested, namely  redirecting a few asteroids to slam them into Mars.

I am a supporter of space travel and colonizing planets, but we are not doing a very successful job with planet Earth. Maybe we should first clear up our act here, then find less destructive terraforming  methods  with outcomes that we might be able to predict.

iOS 9 is taking a lot of criticism