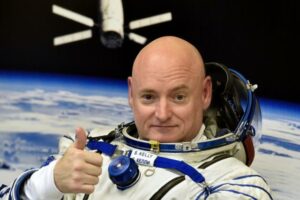 Scott Kelly left Earth around 6 months ago for a one year mission on the Space Station, it will be the longest space mission a NASA astronaut has ever accomplished. Celebrating half-time, Scott took to twitter, answering any questions space enthusiasts might have.

A lot of questions were asked, with the answers giving an insight on how life is “sitting in a tin can, far above the world”.

One thing that surprised me was the speed of their internet connection, I was thinking they would have some kind of super fast satellite uplink, but when asked how fast his internet connection is, he answered dial-up speed. For those of you who can not remember a time without smartphones, our ancestors used to get into the internet using a modem and an analogue phone line, it was called dial-up internet access, with download speeds of up to 56 kbit/s!! Yes, a kilobit used to be a measurable unit.

During his twitter session we also learned that, you most probably can not smell anything in zero gravity, because the astronauts do not wash their clothes and drink recycled urine, but they got to see a preview of The Martian, helping to boost their morale, up in space.

By the way, he also said that he tries not to listen to David Bowie’s Space Oddity.

4chan has been sold to the previous owner of 2chan, who has nothing to do with 6chan