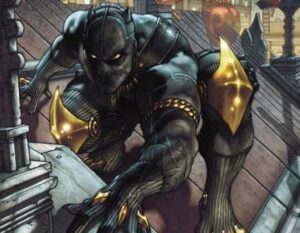 Ta-Nehisi Coates, national correspondent for The Atlantic and author of the  bestselling book “Between The World And Me” seems to be the perfect choice as author of the upcoming Black Panther comics. Marvel offered him the job after he had interviewed a Marvel editor at The Atlantic’s New York Ideas seminar.

As a correspondent for the Atlantic, Coates writes about cultural, social and political issues, underscoring the African-American aspect and he is a distinguished comic book fan.

“How often do you find a literary voice as singular and powerful as Ta-Nehisi Coates, who also happens to be a hardcore fan of the Marvel mythology?”

Coates says about himself

“It was mostly through pop culture, through hip-hop, through Dungeons & Dragons and comic books that I acquired much of my vocabulary,”

Stan Lee and Jack Kirby first created the Black Panther back in 1966. His real name is T’Challa, born in the fictional kingdom of Wakanda. Coates will be writing “A Nation Under Fire”, where the Black Panther returns to his homeland to fight a group of terrorists with superhuman strength, called the People.

A Black Panther movie starring Chadwick Boseman, will follow in 2016

Sneak previews and lousy internet – Life on the Space Station