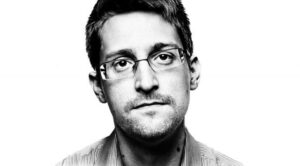 We all know Edward Snowden as the famous, ex-CIA, whistleblower. At the moment he is taking a vacation, of unknown length, in Russia. Despite the distance, and thanks to modern technology, he was able to appear on Neil deGrasse Tyson’s talk show, Star Talk.

Neil, an astrophysicist, sat opposite a monitor and chatted with Ed via robotic telepresence (an expensive video messaging monitor on wheels). They started off with a few geeky subjects and then moved on to data compression and encryption, as expected. It was during this part of the interview that Snowden came up with the theory, if aliens encrypt their messages, then you could not distinguish their communication from “random noise”.

So what we are hearing, that’s actually an alien television show or, you know, a phone call … is indistinguishable to us from cosmic microwave background radiation.”

If you consider the technology we will need for a non-suicidal manned mission to Mars, then you can imagine how advanced a civilization must be to have the capability to fly between solar systems, let alone galaxies. With almost absolute certainty, their communication systems will be accordingly advanced (and encrypted). I can’t imagine that aliens will come flying out from behind Saturn with blinking lights, and transmitting over VHF. If they are as smart as they should be, they will also be very cautious in contacting us. I am sure they have their own scientists who have given thought about the possible impacts an encounter of the third kind could have on human society.  It is not surprising that we have not discovered an alien civilization yet, even if they wanted to “talk” to us, we are not even capable of “hearing” the plight of other species on our own planet, but expect to pick up a call from an alien species hundreds of light years away.

Saving General Yang: See It on Netflix Because We Said So