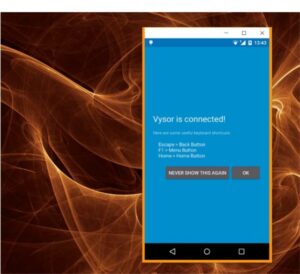 Koushik Dutta, better known as Koush in the Android community, has released a new Chrome app called Vysor. The app, that is still in Beta, easily mirrors your Android screen on your PC or mac. He has mentioned on his  G+ account  that he plans to make Vysor a paid app but he hasn’t really worked out the details.

I tried the app on a Windows 10 PC using a Nexus 5 phone and it wasn’t that complicated. You need an ADB driver that I downloaded from his site here. Windows did give me a lot of warnings but I ignored them (my computer has luckily not blown up yet). You also have to activate USB debugging on your Android device.

> go back to settings

Then if you attach your phone via USB to your computer and run the app it should work. Another feature that has some geeks excited, is that you can share your screen with other users who have the app too. I must add, do everything at your own risk, I am not the super geek who actually knows what happens in the background.

That being said, the app is a functioning gimmick, for those who need or want it. There is room for improvement and as the name Beta implies the app is not yet finished.