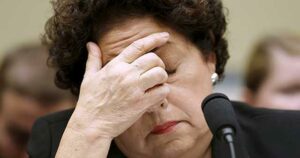 This morning, amid a growing storm of outrage over the hacking of millions of government personnel records, Katherine Archuleta, Director of the Office of Personnel Management (OPM) submitted her written resignation to President Obama’s office.

Yesterday she told reporters that she had no intention of resigning her post as head of the government’s massive human resources department, but overnight she had a change of mind. As the numbers of records compromised continued to grow and details of massive security blunders and failure of the OPM to take steps that might have prevented the leaks began to surface during hearings this past week, politicians on both sides of the aisle began calling for her to step down.

Only a few weeks ago Archuleta admitted that her department had let slip the records of 4.2 million government employees. But then the numbers began escalating first to 12 million then 18 million and as of yesterday it has climbed to over 21.5 million with speculation that it could reach nearly 32 million by the time the dust settles.

The government employee records were compromised due to a hack that had been detected months ago and may have been going on for over a year, yet the department did next to nothing to prevent a similar hack even after the first intrusion was detected. When experts went back and looked for similar hacking activities they found that yes, a second hack had taken place even after the first hack had been discovered.

Most chilling however is the fact that not only were employee records stolen, the cyber-attack (strongly suspected of being carried out by agents of the Chinese military) also snared the records of every person who had ever applied for a security clearance and those records included things like medical records, psychological records, military records and the records of their family members. Even FBI Director James Comey admitted that he was informed that his records and those of his family members had been stolen during the cyber-attack.

House Oversight and Government Reform Chairman Jason Chaffetz said in a written statement following the announcement. “OPM needs a competent, technically savvy leader to manage the biggest cybersecurity crisis in this nation’s history. The IG has been warning about security lapses at OPM for almost a decade. This should have been addressed much, much sooner.”

Archuleta will be replaced by Beth Cobert, who currently works in the White House budget office. No word yet if Ms. Cobert is actually ‘a competent, technically savvy leader’ or knows anything at all about computer security.

Gross negligence, gross incompetence or just plain-old government stupidity, it doesn’t really matter who is to blame here, the results are still the same and highlight how inept and ignorant our government is when it comes to technology.

Personally, I think Archuleta and a number of her staff (including the bozo in charge of IT security) should face criminal charges.

Imagine if Edward Snowden (or anyone else for that matter) had leaked the personal records of over 21.5 million government employees and the records of everyone who applied for security clearances. I’m pretty sure that would fall under the category of treason.

Cyber-wars 1: What’s the worst that could happen?

Apple taking it on the chin