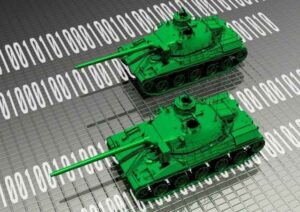 I’ve been writing about cyber-security, hackers, cryptology, bugs, zero-day exploits and other security issues for years now and in recent years I believe things have been coming to a head

We’ve all heard about the recent hacks of the U.S. government’s Office of Personnel Management where they admit to losing the records of 4.2 million employees (and as many as 32 million total records may have been compromised), two major health care companies, JPMorgan financial records and literally hundreds of millions of consumers credit card records lost through the hacking of Target, Home Depot, EBay and others. Many of these attacks have been attributed to agents sponsored by foreign governments.

You’ve got to be a little frightened by all these cyber-crimes. But these attacks appear to be isolated incidents rather a coordinated attack.

But what exactly would happen if some not-so-friendly government actually did decide to launch an all-out cyber-war against us? Would we be ready to defend ourselves? Could we launch counter attacks? Could we undo any damage done? Could we even track down the culprits responsible?

Unfortunately I believe the truth is we are at a dangerous point in history where we are not prepared to defend ourselves and we face some catastrophic scenarios if (or when) the cyber-wars begin.

So what’s the worst that could happen?

Total collapse of the government and the economy, for one, leading to the total collapse of governments and economies all over the world. Disruption of all forms of communication (except for face-to-face talking). Loss of the power grid. An end of oil and gas production. Transportation shut downs.

And ultimately, massive starvation, disease, riots, old fashioned global warfare and a society that crashes back into a pre-industrial revolution chaos. In other words, the end of the world as we know it.

Do I really believe that a large-scale cyber-war is possible any time in the near future? Actually I believe the cyber-war has already started. But heck, you can draw your own conclusions.

To that end I was thinking about writing a series of articles specifically designed to scare the shit out of everyone who reads them. The reason I want to do this is maybe, just maybe, one or two people who read these apocalyptic speculations will be motivated to do something to avoid the impending cyber-Armageddon.

Now I know that trying to tackle all these different possibilities in a single article would be a bit daunting so my plan is to take individual cyber-vulnerabilities and blow them out to their most dire conclusions.