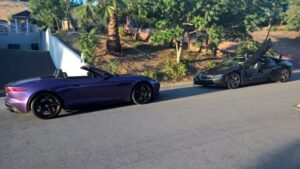 Over the 4th of July my Jaguar had a run in with the NVIDIA i8 and it got me thinking about both of these amazing cars.  Both the Jaguar F-Type and the new BMW i8 are beautiful cars to behold if not the most practical cars to buy and own.  Both represent the cutting edge of their firm’s stable.  The F-Type in its full performance form has a 500 HP+ engine, now has on demand 4 wheel drive and no luggage space what so ever.  The i8 has two motors putting out 350+ HP and, amazingly, weighs less than the Jag.  While prior F-Types were only two wheel drive and had problems putting the power down the latest versions have rear wheel biased all-wheel-drive so you can use more of the power you have though reviews on this change have been mixed.   Both cars view trunk space as an unneeded luxury so if you take one shopping you’re passenger will likely be what you bought.

In the end what you have in these two cars is the best of what was (the Jaguar) and the best so far of what it coming (i8), as performance focused cars they appeal to many of the same people but the differences are pronounced.

In this Top Gear comparison (they are driving the older Jag) they took the i8 against both the F-Type V8 and a 911 and preferred it and I think this points to interesting things for the future because while both the Jag and Porsche are top of their class they are also about as good as they are likely ever to be using current tech while the i8 is just at the beginning of its learning curve.

The i8 and The Future

If we are eventually moving to a world of electric cars then cars like the i8 are the hybrid link between the two modes.   They still run on gas but use electricity to increase range and performance providing the gas mileage of an economy car (29 MPG in the above hard driving performance test) and the performance of a sports car.

The sound of the engine which contributes greatly to the performance feel is artificially created in the i8 and while it isn’t yet as wondrous as high performance real engines (to be fair the Jaguar also uses technology to enhance its engine sound) for drivers it is generally good enough and this sound technology is still very young meaning it will get much better over time and be even more user selectable.  Though, I expect, drivers who don’t start with gas engines may actually prefer their car to be quiet and you do have that option which can actually be a god send on long trips or when letting a future car drive itself while you nap.   (The now failed Fisker was supposed to have external speakers that let you select engine sounds that included a steam engine and a jet engine.)

I was chatting with a Tesla (all electric) driver over the holiday weekend and he commented on how noisy that car was suggesting everything is relative and that when you get rid of the engine sound it is kind of amazing what other things you hear you can find annoying.   For instance the first Tesla, which was based on a Lotus design famous for rattling, was rather annoying to drive because those rattles were far more annoying without the engine.

But the future will be about crafting your experience and a big part of this will be how the car communicates with you.   The i8, like a lot of current generation cars these days, has the NVIDIA graphics backed instrument cluster which potentially allows you to change its appearance, and what it tells you because it is basically a monitor.   As this evolves you’ll be able to change textures, materials (wood/metal/carbon fiber), and colors either on demand or based on some pre-existing program.  On the Jaguar there is a cool feature tied to a jet fighter derived switch in the center console that puts the car in battle mode (ok they call it Dynamic mode but I like “Battle Mode” better) this changes the conventional instrument lighting to red and enhances the car’s performance.   But with this graphics based technology you could instead change the entire look of the instrument cluster to one that looked more weapons grade eventually even downloading a design that some fan created, or you created, to fully customize the experience (how about something that looked like the Star Trek gauges or jet fighter’s dash).

The i8 showcases a bigger performance range potential which will likely carry forward as well.  Using the engines independently and dynamically as needed for around town where electrics are best to sustained highway speeds where gas is likely better to performance where the low end of the electric engine compliments the high end of the gas engine brilliantly you get a level of optimization that an all gas or an all-electric car can’t provide.

And finally this will loop in nicely with self-driving cars because they’ll be better able to anticipate the cars near term future performance needs and much more effectively configure the drivetrain to optimize for them while giving you the in-car experience that is uniquely customized for you.

Wrapping Up:  For Now I Prefer the Jaguar

Unlike Top Gear, for now, I prefer the Jaguar because, to me, it is the best of what is and while the i8 is amazing, it is also the beginning of an evolution rather than the end and I know future versions will be much better while the Jag’s future will be much more measured.   For instance there are a lot of folks that prefer the 2014 version of this car over the 2016 version.  There is no doubt that virtually everyone will prefer the next version of the i8 over the current version because as good as the i8 is, it’s still using young technology and BMW will learn a ton about how to make it better for the next round.

Now, to be clear, if I wanted a car that was more show but still had a lot of go, wanted to conserve gas, and needed something that drove better in weather (and was a tad more limber, the i8 is kind of a bitch to get in and out of), I’d get the i8 and it would be a close thing which showcases just how amazingly well BMW did in building this showcase car.  A lot of folks must also love this car because they are in incredibly short supply despite being half again as expensive as the Jaguar.  And to answer the question, the i8 clearly has a better handle on the future while the Jaguar is showcase of what is best about the present.

Pewdiepie Made a Ton of Money Last Year