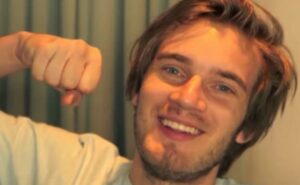 Who wouldn’t love to play video games for a living? So many of us spend many hours playing just to pass the time and have fun. Imagine if we got paid big bucks by the hour for playing.

According to Endgated, Pewdiepie, aka Felix Kjellberg, who hails from Sweden, has 37.7 million YouTube subscribers, up from 27 million last year, and he’s made, get ready for this…$7.4 million playing video games last year.

Now before all of you go hating on this guy, how many of you would turn down this kind of money to play video games and never have to work a day job again? Yeah, sure you would. You’d be more than happy to do this, and wouldn’t turn it down in a million years. (Although me being me, I’d certainly be wondering where’s the catch.)

The guy’s also got a book coming out in October, but we’re wondering how big of a following he has to sell books, and he’s definitely gonna have some serious writing schools to make playing video games interesting on the page. And if you’re still hatin’, the guy also raised a million for charity. We at TG sure ain’t hatin’, and to quote an Oingo Boingo song, “Ain’t this the life?”

The BMW i8 vs. The Jaguar F-Type: Which Has a Better Handle On the Future?