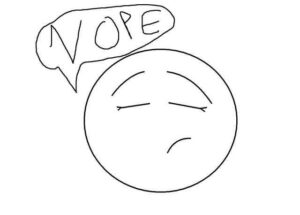 An unnamed North Korean diplomat told Voice of America that it didn’t have anything to do with the recent cyber attack on Sony Pictures Entertainment.

“Linking the DPRK (Democratic People’s Republic of Korea) to the Sony hacking is another fabrication targeting the country,” the official told VOA Wednesday. “My country publicly declared that it would follow international norms banning hacking and piracy.”

Okay then. Well, sorry to have bothered you. Guess we’ll have to look somewhere else.

I suppose that’s the way the game is played these days. X accuses Y of doing bad things. Y vehemently denies allegations, gets all huffy about their reputation and threatens some sort of vague retaliation. X grumbles a bit and goes home.

At that point Y usually doesn’t say anything since the matter was officially closed by the initial denial. If X keeps pressing the point Y might say something like ‘we are looking into this allegation, but even if we were actually doing those bad things (and we’re not admitting that we were) that is not our policy and we don’t condone doing bad things.’

So we’re back to square one again.

It sure would be nice if there was a surefire way to trace hackers back to their lairs then send in the storm troopers (or at least launch a counter-attack – steal everything from their computers then corrupt all their files, ruin their credit, empty their bank accounts and send all their personal information to the cops).

Note: I said it would have to be a surefire back trace with no chance of mistakes.

Of course, if someone could do that then they couldn’t admit it because that would reveal the fact that they could actually do something that is probably borderline illegal.

Remake of The Crow Gets a New Director