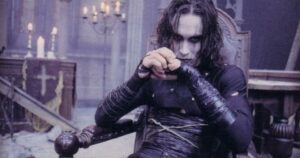 Twenty years ago, The Crow was released, and it was a bittersweet victory. It was a big hit movie, but the star, Brandon Lee, was accidentally killed during the shooting, and he wasn’t here to enjoy its success.

The Crow has been in the works to be remade for quite some time, and originally F. Javier Gutierrez, was up to direct, and so was Juan Carlos Fresnadillo, and many actors were up to play the lead as well, like Bradley Cooper, Tom Hiddleston (Loki from The Avengers), James McAvoy (X-Men: First Class), and Luke Evans (Dracula Untold).

Now Collider tell us Corin Hardy will be the next helmer, who was a video director for artists such as The Prodigy, and he was recommended for the job by Edgar Wright. Collider reports that The Crow is still supposed to be filming this Spring with Luke Evans still on to star.

None of the subsequent Crow films have ever recaptured of the original, but could the time be right for a whole new incarnation of the character? First off, we’ll see if the movie gets made in the first place, and we hope it can do Brandon proud.