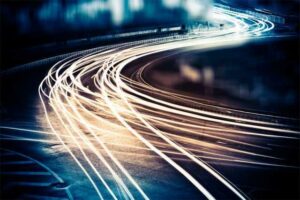 AT&T just announced that they will be bringing their new, ultra-fast fiber network to Cupertino businesses and residents.

AT&T and other companies like Google and CenturyLink, have been slowly rolling out new fiber-based, high-speed Internet services in select cities and now AT&T is setting up shop in Google’s backyard.

The new service boasts broadband speeds up to 1Gbps and customers will also have access to AT&T’s TV services, which includes a DVR with 1 TB of internal storage and the ability to record and watch five HD streams simultaneously.

Back in April AT&T announced plans to expand its fiber network to 21 new metropolitan areas such as Atlanta, Charlotte, Kansas City, Los Angeles, Miami and others. Those lucky few cities will receive both AT&T U-verse and their GigaPower broadband service.

This is good news for the people of Cupertino but unfortunately it’s going to take time before companies like AT&T and others get around to the rest of the country (I live about 75 miles from Cupertino but I’m not holding my breath for fiber).

Considering the mess that cable companies and other ISPs have created, (their reluctance to make even the simplest upgrades, their abysmal customer service and all the shenanigans going on in Washington) an alternative, high-speed service like GigaPower would be a welcome change.

I just worry that judging by the ‘strategic moves’ AT&T has made in the past – buying up cable companies by the truckload back in the 90’s, rebuilding their infrastructures and then turning around and selling everything back to companies like Comcast for pennies on the dollar – I wonder if AT&T will get all their lines laid, the service up and running and then turning around and selling everything to Comcast…again.

But hey, maybe they won’t mess this one up too. We can only hope.

Ballmer steps down from Microsoft Board