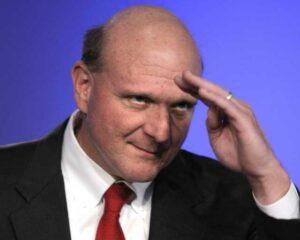 Stating various reasons including a hectic schedule, teaching, civic contributions, learning and taking over as the owner of the LA Clippers, Steve Ballmer has left his position on the Microsoft Board of Directors.

In a statement released earlier this week Ballmer said “Count on me to keep ideas and inputs flowing. The company will move to higher heights. I will be proud, and I will benefit through my share ownership. I promise to support and encourage boldness by management in my role as a shareholder in any way I can.”

Ballmer still owns about four percent of Microsoft’s stock worth an estimated $15 billion so he’s not exactly hurting for money.

Whether you liked what Ballmer did for Microsoft or not, you have to admit that he was instrumental in creating one of the largest companies on the planet and as I’ve said before, as far as I know Microsoft never killed anyone in the process.

Microsoft has built the world of computing into what it is today and Ballmer played a major role in that. Their software may not have always worked exactly as it was supposed to, not all their business dealings were completely above-board and a lot of people didn’t approve of the way they dealt with either their partners or their competitors, but without Microsoft things would probably look a lot different.

Personally I wish Mr. Ballmer all the best with his new endeavors. I think it’s a pretty safe bet to say if Steve Ballmer wants to do something, he will probably do it right and just about anything he puts his hand to will be a success.