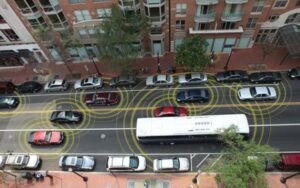 I attended an interesting panel at The Churchill Club this week on the coming connected/self-driving Car with executives from NVIDIA, Mercedes Benz, Nissan and a subject matter expert talking about the future.   NVIDIA technology is at the heart of most of the higher end increasingly intelligent cars in and coming to market over the next few years.  Several car makers have cars in market that actually could drive themselves farther then they now do (they are being limited because of safety concerns).  It is pretty amazing how inexpensive some of these systems are getting.

For instance I sat next to a couple guys from Quanergy who are building a low cost Lidar system for cars and expect to have the cost of their solution well under $100 in a couple years (currently it is around $1,000).   LIDAR is the favored technology that allows self-driving cars to see.

Anyway I thought a number of things said during the panel were interesting, and worth talking about.

How Smart Will Cars Be?

The next generation of cars using NVIDIA’s K1 processor have processing power that exceeds the top supercomputer (Deep Blue) in the market in the late 1990s.   This is actually an impressive amount of processing power and this is just the start, as the cars gain more and more capability their ability to think and solve problems should increase exponentially.  I wonder how we’ll feel once we realize that the car can drive better than we can.  Probably a little like Arnold Schwarzenegger in Total Recall.

What Happens To Insurance When Cars Drive?

There seemed to be a general sense that insurance will go away but that is extremely unlikely.  We insure our homes and they don’t move at all.   We’ll still have insurance to cover theft and any liability resulting from damage our cars do.  But for cars that don’t allow people to drive them the insurance will likely be a fraction of what it is today, offsetting that will be vastly higher rates for people that want to drive their cars in an increasingly self-driving world because they’ll likely increasingly be the source of all of the accidents.   So self-driven cars may only be for the very rich folks who can afford the very expensive insurance in a few years.

Will Google Take Over the World?

There was a lot of concern that Google would be the only company supplying cheap self-driving technology.  It was kind of amazing how much concern there was on both sides of the stage for how much Google would know about where people drove and how much control they would have as well.   The car companies assured the audience they had this well in hand and appeared to share concerns surrounding any company getting absolute control particularly a firm with a record like Google’s.   So Google will be a player but there is enough distrust on both the driver and manufacturer side surrounding the company that it seems unlikely they’ll be dominant.

Is Computer Technology Driving the Change?

NVIDIA was there to attest that it was but it was also clear that it wasn’t driving the change as much as it could or should.   One example of this was on security.  One of the panelists said that computer firms hadn’t stepped up to the problem of dealing with an attack that had penetrated the system and was now operating inside the car’s perimeter.  But that was in error, the technology is called SIEM for Security Information and Event Management and it is relatively mature now sold by firms like HP and McAfee broadly and seen as one of the only viable defenses to the broad spectrum of threats companies now get.  So it looks like the car guys and the computer security guys need to talk more.

When Will Self Driving Cars Take Over?

They never answered this question definitively but you should be able to buy these cars by the end of the decade.  You’ll need to get to critical mass which should take about 14 years unless the government puts in place mandates and/or heavy incentives.   Progression should start with cars driven by people sharing roads with those driving themselves.  This will move to lanes especially for self-driving cars which will increase over time until human driven cars are pushed off onto frontage and surface roads.   After that, like horses, you’ll only see people driving cars on private roads or tracks.   This should be the way things are in the 2030s.

What Will Be the coolest thing about early self-driving cars?

They’ll be able to drop you off and then park themselves, you’ll be able to call them to come pick you up again.  This is being positioned as the killer feature of early self-driving cars because at slow speeds they can truly be autonomous and operate much like a limousine does now.  With electronics systems already in place in many airports to wirelessly charge for parking the car would drop you off when you are flying at the curb and then you could call the car to meet you when you got off the plane (assuming the TSA doesn’t have a cow over cars driving up to airports without drivers, which may be a stretch come to think of it).

When thinking about self-driving cars it is hard not to recall the car chase scene out of iRobot where the robots tried to kill Will Smith.  It showcases both the promise and problem when you give up driving control to a machine.  The promise is that you can kick back and let the car take over and the car can drive better, faster, and safer then you can.  The problem is that if someone (or in the case of the movie, something) hacks into the system you could be in a world of hurt.

Let’s hope our future has more of the former then the latter but, regardless, by this time next decade we’ll be up to our armpits in these things and by this time in the 2030s we’ll be looking at human driven cars then like we look at horses today which means not that much.