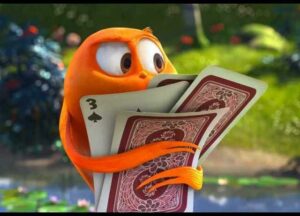 A fish playing Pokémon Red has racked up more than one and a half million views on Twitch, having played the game for over 135 hours.

Grayson the fish dictates the movement of his on screen Pokémon character by moving around his bowl.

The game was created in just 24 hours, and follows another Twitch stream earlier this year, which invited multiple users to partake in a single Pokémon game.

“Grayson’s health and safety are our primary concern,” wrote Catherine Moresco and Patrick Facheris, a pair of students who created the project at this year’s HackNY hackathon in New York.

The statement came after concerns were expressed about the Betta fish’s welfare on Reddit message boards.

A Twitch user called Rampantzombie said: “Why are over 17 thousand people watching this?” while Benguu23, another Twitch user, expressed concern that Grayson was missing his family.

Grayson remained still for several minutes around 11.30am this morning, leading many users to question whether or not the fish had died. When Grayson started moving again nine minutes later, users were delighted to see that the fish was still alive.

Slevra, another Twitch user said: “I will spend my entire weekend watching this damn fish succeed!”

Nintendo first released Pokémon Red on the Japanese market in 1996.

By 11.45am BST on Friday Grayson’s live feed had received 1,615,517 views. You can watch the live feed of Grayson’s Pokémon game here.

The Churchill Club and The Future of the Connected Car