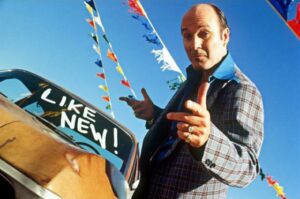 There are a number of services that you can use to purchase a car on-line and I’ve just used several and came away with a cautionary tale.   Let me give you an overview of the three services I used and the benefits and problems with each.

CarGurus seemed like an amazing car shopping site.  You could put in what you were looking for and they mailed you regular emails with listings that matched your interest and if they couldn’t find one that matched that came really close.   Eventually they sent me a deal that looked too good to be true a 2008 A3 with a 3.2 engine for $13,000 and low mileage loaded.  Now the service flagged this amount as questionable since it was around half what the car was worth but often when folks see a deal like this the desire to get an incredible deal outstrips their good sense and this almost happened to me.   I contacted the seller and asked why the price was too low and he told me it was a salvaged car.

A salvaged car is a car that has been written off by the insurance company and it may have a number of big problems.  Currently there are a huge number of flood damaged cars on the market being sold as if they weren’t salvaged and flood damage is a nightmare because it results in corrosion in areas that you just can’t get to, electrical problems, and bearing failures among other things.  The cars can be made to look undamaged though as this damage goes on in places you can’t actually see very well.

This car had been in a front end accident according to the seller and the problems had been corrected.  Now there was no mention of this being a Salvaged car on CarGurus and I did use the fraud flag to flag the car but the action they took wasn’t until days later and they never sent me a note alerting me to their action.  I’d use them again but would be far more cautious.

CarFax is a service that has its flaws but for the money is one of the best ways to see what has been going on with the car.   Interestingly CarFax indicated the far had been sandwiched in the accident, hit from both the front and the rear, and the seller had not disclosed this.   When confronted the seller indicated that this was minor and had also been corrected.

It should be noted that CarFax only records actions from dealers and repair shops connected to a reporting network.  It didn’t pick up the repair to the car but it did show it had been well cared for and all the services had been performed.  It offered the use of a new service that sounded incredible.   CARCHEX where a mechanic would go out and do a review of the car and report any issues.

First getting CARCHEX to actually do the work timely seemed to be a problem.   I kept getting assignment alerts which looked like they couldn’t actually find someone to do the job.  Finally, on the 4th of July someone went out to look at the car and, given this was so late, I’d asked for a verbal review followed by a written report.   Both gave the car a clean bill of health with only minor cosmetic issues that needed to be dealt with.  He did mention the wheels were beat up and so I’d planned to replace them.  Based on this report (they have since refunded my money) I purchased the car for the asking price and had the car delivered.

Upon arrival we found the following problems.  The windshield was broken (typically I’d replace this anyway at this age), the driver’s seat leather was visibly damaged, the horn and right front turn signal didn’t function, the left real light lens was broken, and most troubling the adoptive headlights weren’t functioning (typically costs about $1,000 to fix this problem).   None of these were hard to see (the light issues showed up as huge dash warnings when you drove the car) and checking the horn is a common test.  It was also missing a spare and a tow hook and tow hook cover.  It seems likely that the CARCHEX guy was either bribed, blind, or actually was shown a different car and didn’t check the VIN number.   I’ll assume the latter but I can’t possibly recommend this service as a result.

Impact on me is that I likely paid about $2,000 to $3,000  more for the car than I would have had I known about the problems and the refund of the service charges, which the service provided when I complained, didn’t cover that cost.   I should add that mechanically the rest of the car is solid and it doesn’t appear that the frame is bent (which was my primary concern given the car’s history).

Pat Goss of TV’s Motor Week (I’m a fan of the show) is their advocate and they had solid recommendations so my experience may be an anomaly but given their lack of problem remediation I doubt it.

If you are going to buy a car remotely, and you don’t want to gamble, go see the car and have a mechanic the seller doesn’t now check it over.   A service like CARCHEX would be invaluable if it worked but it doesn’t appear to so I can’t recommend it.   I did ask them if they planned to put in place any process that would prevent this from happening again and CARCHEX never responded (update they eventually did respond after I published and did have a remediation program, it just didn’t work with me-I actually feel much better about the service now and would use them again).   CarFax is a critical resource but it just isn’t comprehensive enough to rely on alone but you could use it to find any obviously bad cars and save yourself a trip; and with all on-line selling services if the deal looks too good to be true it likely is.   Of the on-line sales sites I use only eBay seems to achieve what I think is a reasonable level of care, but with cars, even with them, I’d want to have my own check done.

You can have a ton of fun buying on the web but learn from my experience and not from your own.  As far as my little A3, I’m having a ton of fun with it anyway fixing the stuff that I can (I used to be a mechanic when I was very young), farming out what I don’t want to deal with, and having fun driving it (it is a ball to drive).

Ultra-Fast 5G Wireless Is Coming And Will Be Totally Different