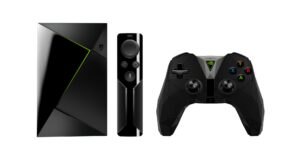 The NVIDIA Shield set top box was an amazing bit of kit. It had enough performance to play Android games on your big screen TV, it could stream games from the cloud or from your PC, and it had some basic video streaming options like Netflix. But, as good as it was for gaming, it was this limited number of game streaming options that made it less than what it otherwise could have been.

Well the Shield TV 2017 is now out and NVIDIA addressed this shortcoming with a vengeance. Let’s talk cutting the cord and Shield 2 this week.

Now I’m a TIVO user for most of my TV watching which means I’m recording shows as they air and then watching them when I have the time. But, increasingly, I’m going to Amazon or Netflix and watching the programing they have without commercials or the need to fast forward through breaks. I can’t even watch movies that were recorded anymore because they are so cut up and it seems the stations are putting way too many commercial breaks in the things, granted since I’m generally skipping the commercials anyway reducing their value along with many others I’m probably part of the cause.

But even for shows like Game of Thrones which we only started watching during the Christmas break and binge watched until mid-January I’ve found it a ton better to just buy the series rather than wait each agonizing week for the next installment. Granted when you get caught up you, or at least I did, tend to go into a bit of show withdrawal and waiting until the last season of Game of Thrones is available is just agonizing. For god sake speed up the next season, Winter is HERE!

Anyway; once you get used to watching programs without ads it is really painful to watch programing, like news, real time. Now increasingly there are just two things that just don’t seem to work that well for on-line streaming. They are sports and news largely because these shows have a very short interest half-life. But outside of the Super Bowl and the occasional Olympics we don’t watch much sports leaving local news and some shows that aren’t yet available on Amazon (Hulu has ads you can’t skip) as the ongoing problem.

So, Why Haven’t More People Cut?

Where you really see a lot of cord cutters is with kids who are just beginning to go out on their own. They have limited funds, are more willing to try something new, and haven’t developed the habit of watching traditional TV. For them binging and on-line streaming is more likely to be the norm than the exception. In addition, they really don’t watch that much TV as they have been far more wedded to their mobile device than a TV set.

For those of us that came up with traditional TV it is far harder to change habit patterns that revolve around watching TV during downtime at night though I can certainly say that slowly older age groups are becoming just as addicted to mobile devices as they once were to their TV sets.

I have spoken to folks in my age group that have cut the cord and, it seems, at least for those that didn’t go back, after a few months they don’t seem to miss the old connection to the networks and many have found other ways to fill their time anyway.

So, the trend continues to advance largely lead by the youngest adults but it is expanding to older groups as well.

What makes this next generation Shield particularly interesting is that it now provides a combination of broad base gaming and very fast streaming coupled with the capability of supporting the newest 4K HDR TVs. Given it now supports Amazon, and a far wider variety of streaming sources now as well, it may be the top of the heap when it comes to choosing a product that allows you to get the broadest on-line experience from the newest TVs in the market.

At $199 for the basic model (most folks won’t need the storage of the advanced model unless they want to either download and save content or install an application and tuner to record it off the air and a TIVO will likely be better if you want to go that route anyway). Now there is one thing with storage and that is if you go on a vacation and want to take your content with you along with the box but I find I can use my laptop or tablet for that and I need to bring them anyway so that isn’t really an option for me but, if you’ve got young kids it would be far safer to bring the Shield them leave them with your PC.

One big new option is voice command which a lot of us have become wedded with since Amazon launched the Echo. Google’s implementation, which is what runs on the Shield, is better than Amazon’s at the moment so this is an interesting feature to play with.

Cord cutting is a “thing” and it is expanding rapidly particularly for folks who want to cut expenses and that are sick of commercials. It really does give you back your time and given services like Amazon and Netflix track progress you can start the video on your TV, grab your tablet or phone, and continue it on the road (though, please, not of you are driving). Right now, the most powerful streaming solution appears to be the second-generation NVIDIA Shield TV 2017 and at $199 it won’t break the bank.

10 Online Apps to Help You Fight Procrastination while Writing

7 Web Based Tools To Optimize Productivity