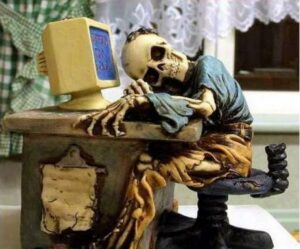 Brian Krzanich, Intel’s new CEO, upon announcing an historic layoff and blaming poor PC sales performance has handed AMD one hell of an opportunity.  As you might expect when the leading vendor in a market implies they may exit it the number two is likely going to suddenly be seen by some as the new go to vendor and that is AMD.  Suddenly I’m seeing a lot of interest that I hadn’t seen before in their new Zen architecture due out later this year.  (It should be noted that while AMD also took a hit, as a percentage, it was far lower than Intel’s and their outlook, in terms of growth was far stronger, showcasing the benefit of focus).

While we exist in a blame world, and this is consistent with Intel’s move apparently blaming the PC unit for poor performance thus the layoffs, in this case I really don’t think this the employees fault because it has been clear for some time that the PC segment has been treated like a Cash Cow.  The cause of this problem was largely a shift in focus by the two core vendors supporting the PC space to mobile devices which starved the PC market for advancements much of last decade and low marketing funding, particularly in demand generation, that should have otherwise assured a healthier segment.

It is not unusual event to see a company shift resources from a stable market it dominates to a new market that appears to provide more value (it seldom ends well) but looking at Apple’s numbers now showcases that even had Intel been successful the new market would have collapsed even faster suggesting the mistake was to chase it in the first place.

Now there have been a lot of theories why the PC market is soft.  It has been blamed on two Microsoft operating systems now replaced (Vista and 8) for the most part and I do think there is a connection to Microsoft being very slow to realize that the migration effort to move from an old system to a new one was excessive.  This was something Apple and the Tablet/Cell Phone vendors addressed far earlier, but it is now addressed with the only remaining problem being a large base of Windows XP users who are effectively stuck.

What actually happened was that when Smartphones and especially iPads took off a new theory arose and that was that people that would have been otherwise buying PCs were buying one of these devices.  So both Intel and Microsoft shifted billions from their primary consumer products (PCs) to these new opportunities in a wasted effort to catch the wave.  However the reason Intel wasn’t more aggressive in this market in the first place was because of comparatively low margins that the firm couldn’t sustain thus, for them, even winning would be losing.  The only way to get to the margins they needed would have been to emulate Apple and do a full end to end solution, something they also weren’t interested in doing.   On the path they were on they were always going to fail if the measurement was sustained margins.

For Microsoft the successful path they had traversed with Windows had them partnering with Intel and emulating Apple to create a broader competitor and Windows was far more successful than the MacOS was as a result.   Google, with Android, showcased that emulating part of this strategy was still very powerful and they now have a greater market share than Apple does albeit at a margin cost Microsoft couldn’t sustain (they effectively lose money on Android).  Ideally the strategy should have been for Intel and Microsoft to again partner and pool their efforts to go after this segment with an iOS clone but neither were willing to take that path, and, to be clear, unless the result was an end to end solution like Apple’s where both vendors split the profits, the result would have still been too small a margin unless they also split royalties from the apps.

Recently Steve Ballmer argued that the right path for Microsoft, if they wanted to do mobile, would be to basically take Android and make it their own supporting this conclusion but still not addressing the margin issues.   (Granted it would have been nice had he come up with this idea while he was still CEO).

Overall while the execution was certainly flawed the reason this all failed was the strategy was ill conceived and the goals not clearly defined, because had they been and those goals included margin protection, neither firm would have gone down this path because it wouldn’t get them where they needed to be.  In both cases even a win would have been a loss because of massive margin erosion.

However billions went into these efforts billions that mostly bore not fruit and had that money instead gone to advancing the PC to make tablets redundant (and Surface showcases that would have been a better strategy) or to come up with a blended mobile platform like Continuum at scale making current tablets and Smartphone obsolete.  Or, alternatively, just doing demand generation marketing to pull people off of old Windows XP boxes so they could be on newer platforms more easily upgraded and were more motivated like car and TV buyers are to upgrade prematurely (both cars and TVs can last economically up to 10 years yet those industries successfully convince buyers to upgrade far more often for far less money than the billions Microsoft and Intel wasted on mobile products that didn’t sell).

So the collateral damage, or better said, opportunity cost for the huge push to mobile was PC support and that market paid the price.  Realize that all of the reasons that have been given for PC stall have effectively been disproved or fixed and that leaves the simple conclusion that there just isn’t enough demand generation going on.  In fact, if you look at Microsoft’s Surface efforts, which are well marketed, you see decent numbers.

So, I maintain, the reason behind slow PC market performance is under investment by the core companies.  Microsoft is pivoting back and appears to be pulling back from their Smartphone efforts but Intel appears to be even more aggressively pivoting away from PCs, but to low margin IOT and low volume AI, which is why interest is shifting to AMD but this will open another problem for Intel and that is how they are going to keep their FABs operating at acceptable capacities and margins up if their PC volumes drop precipitously.   IOT volumes are mostly in sensors near term a segment that is even lower margin than Smartphones (Intel exited it some time ago) and as IBM showcased, servers don’t consume that much FAB capacity, certainly not anywhere near the level of PCs.   (FABs are factories that build processors).

So, at the heart of this slowdown wasn’t an Intel employee mistake it was an Intel executive and board mistake.  They didn’t think through what it would actually take to move into the Smartphone market successfully and under budgeted the effort, they didn’t do what was needed (like partner with Microsoft and combine resources), and nor did they assure that once there the firm’s margin needs would be met.   Firms like Acer, Dell, and Lenovo are showcasing that focus is allowing them to do well with PC sales (HP’s dropped like a rock but that largely because of their CEO spinning out the PC unit).

So, to the Intel folks that are being laid off, realize it wasn’t your fault and to those that are staying, unless something changes, you may be next.   Maybe it is time to consider sitting down and thinking up a strategy that won’t result in another round of massive layoffs would be prudent.

To AMD, congratulations, if you can get Zen to market you have an unprecedented opportunity to gain share.

Now, one final thing, Intel is doing the layoff right, if you do one should go big and fast to reduce the disruption and return the firm to a hiring mode I just think that if the cause of the problem is a lack of resourcing an area than massive cutting out more resources won’t make it better.  Just saying.

Arcade look is out, live dealers are the new trend for online casinos