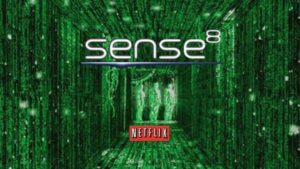 As we often point out here at TG, there’s infinitely better writing on TV these days then at the movies, and it’s a place where a lot of people can get a second chance. M Night Shymalan, who was pretty much done after the disaster of After Earth, has gotten decent reviews with Wayward Pines. Can the Wachiowskis have a similar comeback with their new show Sens8?

“It’s easy to see why Netflix would jump at a series from the Wachowskis and sci-fi writer J. Michael Straczynski, even if the credits are a spellcheckers nightmare,” variety quips. Yet while the streaming service was no doubt hoping for The Matrix, in commercial terms, it wound up with something closer to Jupiter Ascending and Cloud Atlas – or worse, it’s own Marco Polo.

“The main problem, simply, is that the show doesn’t make much sense.”

As Ace of Geeks feels, “This show is the epitome of the slow burn. By episode three, we still know almost nothing about why these people suddenly have a psychic connection that allows them to share memories, experiences and skills.” Yet as Geeks tells us, “By the middle of episode three you’ve forgotten to care about the mystery because you’ve grown to care about the characters – a lot of people forget that this was the reason Lost was successful.”

While at least one other review, on The List, felt that Sense8 “struggles to balance its ensemble cast,” The Hollywood Reporter felt it was “an involving, earnest and ambitious sci-fi drama.”

It seems that a lot of filmmakers that have taken a tumble in recent years are fleeing to cable to try and redeem themselves. David Benioff had written a lot of screenplays that flopped before he adapted Game of Thrones and helped make it one of the most popular shows in history. M Night Shymalan’s show Wayward Pines has gotten decent notices, and Cameron Crowe’s probably hoping his upcoming series on roadies will rescue him after Aloha went down the toilet. Can Sense8 help spring the Wachiowskis from bad movie jail? (Actually, we could say that all the filmmakers we just mentioned were practically on Bad Movie Death Row.) It’s all up to the court of public opinion now, and we get the feeling fans and critics could end up polarized on this one, which could be much better than everyone unanimously agreeing they hate it.

Big Trouble In Little China Remake in the Works With The Rock?!