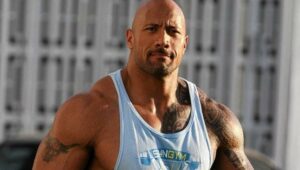 Okay, Big Trouble in Little China wasn’t one of John Carpenter’s best movies, we all know this, but it was a hell of a lot of fun, and if you watch it with the intention of just having a good time, that’s what it delivers.

So, as you can guess by now, Big Trouble’s slated for a remake, which is again no surprise, and we guess it shouldn’t be a surprise that coming off the big box office of San Andreas, Dwayne “The Rock” Nelson is slated to star.

As The Wrap reports, the writers of X-Men First Class will be taking on the new Big Trouble, and the Rock will be producing as well. The Wrap tells us Johnson loves the original, and this report also tells us he’s up for the big screen adaptation of Shazam as well.

While we don’t think a Big Trouble remake is as sacrilegious as, say, the remake of Halloween, we still like the original just fine, and wish people would rediscover it instead of waiting for a remake that’s not gonna be anywhere near as good. I know, we say that practically every movie report we do, and we wish we didn’t have to.

Can Sense8 Finally Save the Wachiowskis?

Movie About Sony Hack in the Works