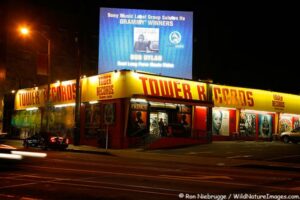 Next year will be the ten year anniversary of Tower Records going out of business, and I still miss it like crazy. I have so many fond memories of buying albums there, and regularly spending a lot of time there, as well as spending a ton of money on music and movies.

Now Colin Hanks, son of Tom, has made a documentary about the rise and fall of Tower, All Things Must Pass, and Rolling Stone tells us it was a big highlight at the SXSW Festival. You kind of get the impression this documentary could be another Sound City, the Dave Grohl film that not only chronicled a great entity in the music business, but something that will never be seen again due to the music business collapsing.

The film was seven years in the making, and it was finished thanks to a generous donation from Kickstarter, $92,000. Bruce Springsteen, Dave Grohl, and Elton John are just a few of the interviewees.

Interesting enough, this story tells us that Tower reached its peak the same year the music business started its downward spiral, 1999, and the company made a billion dollars that year. Then things started collapsing rapidly thanks to illegal downloading, the company filed for bankruptcy in 2004, and went out of business in 2006.

I’m dying to see this documentary, although I’m sure parts of it are going to make me sad. I’m hoping this documentary will not only be a nostalgic look back at Tower, but I’m also hoping it will give viewers the sense of tragedy that we lost such a great record store chain. Variety has called All Things Must Pass “sentimental yet sharply observed,” so I may indeed have my wish.