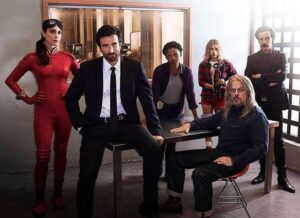 At least for the time being, we’re still in the throes of superhero mania, and now PlayStation is launching a brand new series, Powers, that’s certainly not your usual Marvel / DC story.

Variety calls it “a refreshingly R-rated retort to broadcast’s overabundance of comic book serials.” Powers was based on a comic series that first came out in the world in 2000, and the cast includes Eddie Izzard, Sharlto Copley, Susan Heyward, and Noah Taylor, among others.

The Wrap also calls Powers a “fresh perspective on superheroics,” and that it’s “more similar in tone and approach to shows like Fargo, The Killing and True Detective than superhero shows like Agents of S.H.I.E.L.D., Arrow, and The Flash. It is a refreshing amalgamation of the two genres that creates a fascinating exploration into the world of comics by imagining what it might really be like to live among costumed superheroes and villains.

PlayStation and Netflix are trying to create their own content and provide new ways to stream it out to the world. Could Powers be a major new step forward? We’ll find out soon enough, and even if you’re tired of superheroes, this could be a bold new twist on them.