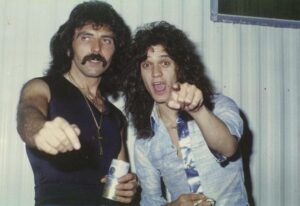 Anyone who knows the history of metal has to know a bizarre little fact, that Black Sabbath guitarist Tony Iommi lost the ends of several of his fingers in an industrial accident, and he has to make thimbles to put on the end of his fingers so he can play guitar.

Now Rolling Stone has reported Iommi’s recalling of the incident, with at least one bizarre new detail. It’s been a subject of debate as to whether the accident contributed to creating heavy metal or not, but Iommi told Stone, “Losing my fingertips was devastating, but in hindsight…it made me invent a new sound.”

Iommi was working in a factory in his native Birmingham England, which was “much like your Detroit.” Iommi was going to tour with Jethro Tull, and on his last day at the factory, “They put me on a huge machine, a massive thing, and I didn’t know how to work it. As I was pushing the metal into the machine, it came down with such a force and bang, it just chopped my fingers. There was blood going all over the place.”

One of Tony’s coworkers put his fingertips into a matchbox, and at the hospital Iommi was told he’d never play guitar again. Then his factory manager told him about Django Reinhart, a legendary jazz musician who had a paralyzed left hand. He only had two working fingers, but listening to a Django album, the guy played like a mofo, and you wouldn’t have known he was handicapped in a million years.

All in all, Iommi’s accident “turned out to be a good thing off a bad thing.”

It is also Tony Iommi’s birthday today, and the metal master is now 67 years old. Thanks for everything brutha, because without ya there is no metal.

Walking Dead Finally Gets Beat in the Ratings