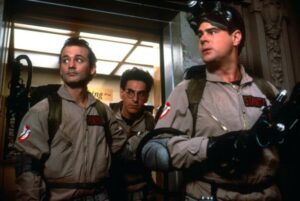 Ghostbusters 3 is finally going forward with an all female cast, and it’s pretty much going to be the Bridesmaids team fighting apparitions. We were wondering if any of Dan Aykroyd’s original script would be worked into ‘Busters 3, and now Aykroyd himself has shed some light on the subject.

As Rolling Stone reports, Dan said, “There’s three drafts of the old concept that exists. And we’re going to be able to salvage some of it and use ti some day. Let’s get one made and that will reinvigorate the franchise, and then we’ll go on to maybe doing a more conventional third sequel as we were planning and another idea I have for it.”

Aykroyd has also been very happy about how Ghostbusters will continue with an all-female team. “It needed a reworking. The thing needed a new engine. It needed new exhaust. It needed new steering. I’ve got three daughters, I’m all for female empowerment.”

Ghostbusters 3 will reportedly start shooting this summer, with a targeted July 22, 2016 release date.

It’s Official: Neill Blomkamp to Direct the Next Alien Movie

The Bloody Origins of Black Sabbath