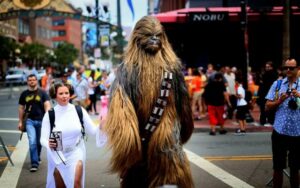 There’s been speculation for some time that Comic Con may be leaving San Diego and will relocate somewhere else. That speculation has heated up again recently, with L.A. and Anaheim hoping the great geek convention will relocate to their place on the map.

The LA. Times tells us that the San Diego convention center is being redone, and the powers that be are thinking of having the event this year in L.A. or in Anaheim. A spokesperson for the Con told the Times, “The proposals we’ve received are pretty amazing. It’s not an easy decision.”

Another reason Comic Con may have to move is so many people are coming down, like they say in westerns, that town may not be big enough for all of ‘em, hence the convention center expansion. A spokesperson for the convention center doesn’t think Comic-Con is going anywhere any time soon, but he admitted, “If we had an expansion, we would be sitting in a much more comfortable position.”

Wherever it stays in San Diego or moves on to another Southern California location, there’s no doubt it should sell out in about ten seconds and be geek ground zero as always, wherever it takes place.

From 12 Years a Slave to Doctor Strange