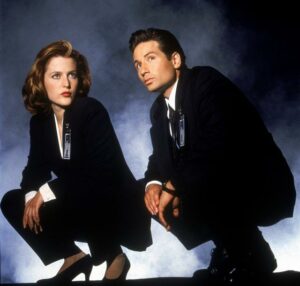 There’s been speculation about this for a long time, and there are many fans who want it to happen, and now it looks like The X-Files could indeed be coming back with David Duchovny and Gillian Anderson.

As Vanity Fair reports, “Fox confirmed they were in the logistical phase of rebooting the series.” This means they want to make sure that all the original players can come back. You can’t do it without the original two, and we hope that show creator Chris Carter will come back as well.

Apparently the person who made the big push for X-Files to come back was Anderson, who told The Nerdist she would be f***ing overjoyed” to come back. Fox also confirmed that the show won’t go forward unless Carter comes back as well. Duchovny said, “I’m assuming that it will happen sooner rather than later now.” He’s not interested in doing a full season, “it will be in some kind of limited form. We’re all old, we don’t have the energy for a full season.”

It’s interesting to point out that this comes on the heels of the return of another popular ‘90’s show, Twin Peaks, and the announcement has just come in that Laura Palmer herself, Sheryl Lee, will be back on the show. As Vanity Fair reminds us, the show takes place twenty five years after the original series, which means Palmer’s still dead of course, so she’ll obviously reappear as a spirit or apparition. (Her boyfriend, Bobby, is coming back to the show as well.)