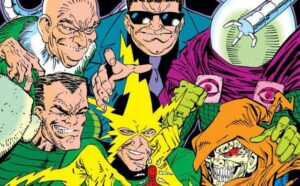 Spider-Man’s been stuck in a rut for a while. The last movie didn’t live up to expectations, and you wonder if the series wouldn’t be better off just calling it a day. (Sam Raimi even recently apologized for the ill-fated Spider-Man 3.)

There’s been plans for a Sinister Six movie for a while, and Cinema Blend cited net rumors, always a peerless source of information, that the Six movie could be shooting in Vancouver. One tweet said a “dude who worked on Planet of the Apes…requested S6 stuff for research…said it was happening.” Then the tweets disappeared. Like the famous question posed in the movie Amazon Women on the Moon, bulls*t or not?

If it is going to forward, Drew Goddard (Cabin in the Woods) will be directing, and it could be a good time for a bad guy team movie, because Suicide Squad is going to be shooting soon.

Speaking of which, the latest rumor about Suicide Squad, which appears via Slash Film, is that Batman could appear in it, and it could set him up for a whole new series of movies. Yes, it would be Ben Affleck, or Batfleck as the fans call him, and the next incarnation of Batman could have him fighting the Joker again, because he’s going to be in Squad as well.

We just reported here on TG that Jake Gyllenhaal was replacing Tom Hardy in Squad, and now that role is open again. Gyllenhaal was going to play Rick Flag, and according to IGN and many other sources, Gyllenhaal has turned the role down, but we’re sure Squad will be going forward for its planned 2016 release.

Star Wars the Force Awakens Will Go Its Own Way

X-Files Could Be Back Very Soon