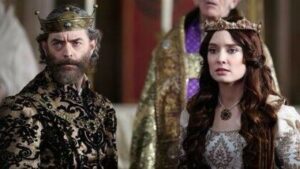 Years ago, I went to see Spamalot on my birthday, and as a long time Monty Python fan, it was wonderful fun. This was several years before Game of Thrones became the hottest thing since sliced bread, and the right medieval spoof can come around at any time, it certainly doesn’t need to be in response to the trendiness of the moment.

Galavant is a new comedy series on ABC, and it’s getting good reviews so far. The Wrap says the show “hits all the right notes.” The L.A. Times writes that the show “is worth the short journey,” because this is apparently a mini-series filling in before Once Upon a Time comes back in March. Yet considering the reviews for the show are pretty strong so far, we wouldn’t be surprised if the show lasts longer.

Cinema Blend calls it “a pitch perfect musical comedy with wit to spare,” and Variety feels that “Galavant largely overcomes the challenges that have traditionally bedeviled TV musicals.” The industry trade adds that the show’s half-hour format works well in its favor, “condensing the need to create songs into a manageable task.”

Variety’s not sure if this show “has legs beyond musical-theater geeks,” but again, Game of Thrones is still a huge show, and we’re willing to bet its fan base could get a kick out of Galavant as well.

Jurassic World Trailer to Expensively Air During the Super Bowl

Does Jared Leto Have What It Takes to Be the Joker?