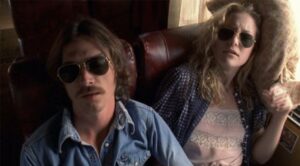 Cameron Crowe first became a star journalist when he was a teenager, writing for Rolling Stone. Then he wrote one of the greatest comedies of the eighties, Fast Times at Ridgemont High, which in an age of raunchy comedies showed a realistic view of teenage life.

Crowe’s career has had a lot of ups and downs, from the all time high of Jerry Maguire, to the all out disaster of Elizabethtown, and like a lot of filmmakers, he’s smartly moving to cable with a new series, Roadies.

The Hollywood Reporter tells us that Luke Wilson and Christina Hendricks are already onboard, with Wilson playing a tour manager, and Hendricks playing a production manager.

While Almost Famous presented a fairy-tale version of rock and roll in the seventies, rock is Crowe’s first love, and considering the rock movie has been a dead genre forever, maybe it can be resurrected through cable TV. Road crews are also long overdue for their own movie or series, considering they work incredibly hard to keep a band going on tour.

BTW, did we mention JJ Abrams is involved with this as well? He’s an executive producer on this series via his production company, Bad Robot.

To Hell With Terrorists: Go To the Movies

The Interview Won’t Be Released Next Week