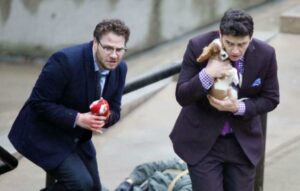 Well they’ve finally gone and done it. Thanks to terrorist threats, The Interview will not be opening next week. The terrorists have threatened a 9 / 11 style situation on Xmas day, and rather than potentially put anyone’s lives at risk, Sony has shelved the film.

If you spend a lot of time waiting for entertainment news to break, or just spend a lot of your day on the net, you saw the news break in real time, and it came down this afternoon that Sony would not release the movie. Variety would also report that the studio announced there were “no further release plans” for the film.

Where the movie could go from here is anyone’s guess. It’s hard to imagine the movie being permanently shelved, and one hopes that after all this broo-ha-ha dies down that it will be released. Variety reported that Sony was thinking about releasing the movie on premium video-on-demand, which would be much safer than a theatrical release.

In the meantime, the L.A. Times tells us that Judd Apatow went on the Twitter offense, saying pulling the film was “disgraceful,” and he added, “When all these businesses decide not to present a movie, they’re basically setting themselves up for other people to threaten them. What do they do when someone says the same thing about the James Bond movie or Annie?”

Cameron Crowe is Back With Roadies