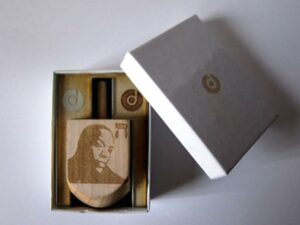 When you think of the great Jewish spiritual traditions, normally Dr. Dre and JK Rowling come to mind, but both have hit the news during Hanukkah for funny reasons.

First off, Uproxx reports that there’s a rap dreidel, the Dr. Dreidel, which has the rap master’s image dyed into the wood. This was the creation of an artist in the Bay Aera, Hannah Rothstein, and she created it out of “sheer hilarity and love of puns.” Each side of the dreidel has a different image of Dre, and this dreidel isn’t officially available yet, but maybe by next year?

In the meantime, the spirit of Hanukkah must have struck one JK Rowling fan, who asked if there were any Jewish students at Hogwarts. As Vulture reports, somebody tweeted the author, stating, “My wife said there are no Jews at Hogwarts. I’m a Jew so I assume she said it to be the only magical 1 in the family. Thoughts?” Rowling replied, “Anthony Goldstein, Ravenclaw, Jewish wizard.”

Following up on Twitter, Rowling added, “To everyone asking whetehr their religion/ belief/non-belief system is represented at Hogwarts: the people I never imagined there 1/ 2 are Wiccans.”

The Hobbit: Battle of the Five Armies on Target For a Huge Box Office Take