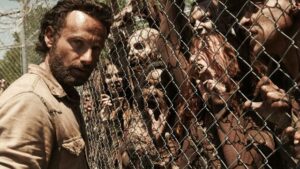 With The Walking Dead so successful, you figure a spin-off series from the same undead universe will probably be a big hit as well, right?

According to the Hollywood Reporter, this will be a prequel, or what AMC calls a “companion” show. The show is going to be called Cobalt, and it indeed will take place in L.A. as the zombie breakout is getting started.

Robert Kirkman, who created Walking Dead, is writing the pilot for Cobalt with Dave Erickson, a vet of Sons of Anarchy. Like Walking Dead, this will have a large ensemble of characters gathering together to fight zombies, just like any other great undead story. All AMC will confirm right now is the spin-off series has the greenlight, we assume it will go into production sometime next year.

We’re not sure when they’ll schedule it, if it will be a lead-in for Dead, or play on alternate nights, but every season Walking Dead gets bigger, and zombies still haven’t hit their peak yet, so why not another living dead show? Only question is, do we need to have a zombie origin story? Who cares how it happened, they’re here, and we’re just gonna have to deal.

Video Games Could Destroy the World in Pixels

The Hobbit: Battle of the Five Armies on Target For a Huge Box Office Take