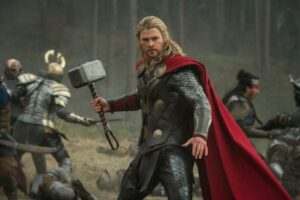 We at TG find the whole Sexiest Man Alive list is pretty silly, and not just because I’ll never be in it in a million years. We’re not sure who came up with this idea, and normally we wouldn’t write about it in a million years, except this year a Marvel hero made the cover.

Yes, Chris Hemsworth, the man who is Thor, is this year’s sexiest guy in the world, according to People magazine, coming out head of Chris Pratt, Idris Elba, and Matthew McConaughey.

Now we haven’t looked up to see how many superheroes have been previous sexiest men, but we’re sure he’s not the first, because usually superheroes have to be strong, charismatic, attractive people in top shape, the kind of person many would love to be if they had the power.

As Buzzfeed reports, Hemsworth’s response when he found out was, “Good,” and he added, “My wife thought it was pretty funny, as I did, we had a good old laugh about it.”

Hemsworth will bring the hammer down again in Avengers: Age of Ultron next May, and Thor: Ragnarok in 2017. (He’s also reportedly playing Doc Savage in the upcoming reboot of the famed pulp hero.)