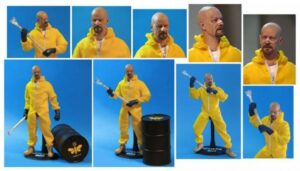 This week gave us an incredible news story. Breaking Bad toys were available at Toys R Us, of all places, a parent went nuts, and they got pulled in a hurry. To be honest with ya, we can understand. In a place where adults can buy toys, fine. But Toys R Us?

So Bryan Cranston tweeted in protest, “I’m so mad, I’m burning my Florida Mom action figure in protest.” Aaron Paul has also weighed in, ranting on the Twittersphere: “Wait, so @ToysRUs pulled all of the Breaking Bad figures from their shelves and still sells Barbie? Hmmmm…I wonder what is more damaging?”

Paul is being a bit melodramatic here, but we understand what he’s saying. Barbie can be seen as promotion an unrealistic and unhealthy image to girls who want to grow up to be perfect. Then Paul added, “And what about all of the violent video games you sell @ToysRUs? Do you still sell those? Florida mom really messed it up for everyone.”

Newsmax also reports that Paul got a petition together, which reportedly has over 60,000 signatures already, but it seems like a losing battle here. As we’ve mentioned before, we think it’s pretty insane that these toys would be in Toys R Us of all places. An adult toy store, fine, that’s great, but we’d hate to think of little kids playing with Breaking Bad dolls on a little meth lab set up.

Then again, maybe little kids have no interest in these toys. After all, nobody’s wearing a cape or a batsuit and they probably would probably look pretty boring to play with.

Where Are the Black Widow and Hulk Movies?