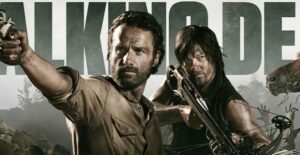 The next season of the Walking Dead is nearly upon us, season five to be exact, and it’s sure to be a ratings bonanza when it debuts on October 12 at 9 P.M. on AMC.

Variety tells us, “Walking Dead opens its fifth season in spectacular fashion, a dazzling adrenaline rush filled with suspense, righteous violence and, before it’s all over, genuine emotion.”

Not to mention Variety tells us that commercials for The Walking Dead “have started to eat into football’s pricing power.” Advertisers want their ads on Walking Dead more than Monday Night Football, which can cost $397,898 for a thirty-second spot.

Ad space on Walking Dead costs $413,695, and demand to get your ad on Dead is higher than Monday Night Football. We also expect Dead to beat out football in the ratings like it has before, especially when it comes back in two weeks.

How the Star Wars Empire Was Built