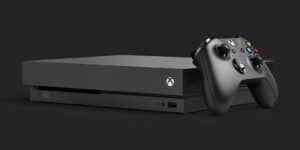 This is probably the most important announcement of E3: Microsoft revealed its new console and the first games that will enjoy the 4K at a huge conference in Los Angeles this week.

The most powerful console?

Do not call it “Project Scorpio” anymore, but Xbox One X. About 3 days ago, Microsoft finally unveiled the mystery on its new game console, which it humbly presents as “the most powerful on the market”. With a massive argument: it is the first console to be able to run games in “real 4K” and 60 fps, unlike its rival Playstation Pro, which takes advantage of artifices to mount in resolution.

A look at compatibility

Like the Sony machine, it is not a completely new platform. As the name suggests, the One X is first and foremost an evolution of the Xbox One, launched in 2013. In other words, the Xbox One games and all its accessories will be compatible with the Xbox One X. And a priori, this brand new Xbox will not have a specific repository: all ‘One’ games will run on all platforms, but with a graphic boost visible on the new machine.

The Xbox One X will be launched on November 7th and will land with a new online game, taking advantage of the support of 4K.

Other announcements that were made

Among the key products presented at the conference are the seventh edition of the excellent automotive simulation Forza Motorsports, or Metro Exodus, which adapts the world of Dmitri Gloukhovski’s novels for a horrific adventure game. Fans will also be entitled to a 4K version of Minecraft.

It remains the thorny question of price: because the console will be very expensive … The new console will surely be pricier that the Sony Playstation Pro. However, fans might not look at the price differences if Microsoft really delivers the robust performance it promises to release into the gaming world with the Xbox One X.

5 Professional Applications That Will Drive Growth in Drone Technology

The Difficulty With Apple’s Change From Customer To Margin Focus:  Killing The Magic