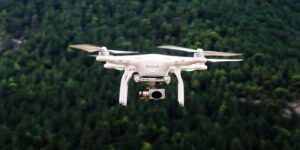 Drone technology is exploding in both sophistication and adoption. They’re expected to grow to become a $21.23 billion market by the year 2022, but already, they’re starting to make an impact on how we live and work.

Though drones have a variety of potential applications, including use by the military and personal entertainment, one of the biggest potential areas for growth remains in augmenting certain professional services. These types of drones are made to make certain jobs easier, more efficient, or more accurate, and thanks to the positive ROI they lend these investing businesses, they’re already poised for widespread adoption.

So what types of professional applications will spur the most growth in drone technology?

With the state of modern drone technology, you might expect industries everywhere to have at least a handful of drones on deck, but the reality is, growth in the drone sector is just beginning. Despite claims that drones “went mainstream” in 2015, or even back in 2013, drone technology is still limited to mostly industrial and military applications. This is partially because drone technology is comparatively expensive for small businesses and one-person operations, and partially because no single drone technology has been the breakthrough, “game changing” experience that can serve as a kind of technological gateway drug. FAA regulations are another key influencing factor, as certain locations—such as over people and roads—are highly restricted, preventing drone operators and developers from having total freedom to experiment or perform.

Still, it’s only a matter of time before the market catches up with consumer expectations and the impressive numbers forecasted by industry analysts. Look forward to new growth in the drone industry, fueled by the previously listed professional applications.

The Xbox One X: The most powerful Console?