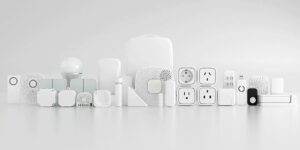 If you’ve been looking into buying one of the latest gadgets for your house, you might have noticed an interesting new trend in the design of electronics. They’re looking less harsh around the edges thanks to the use by companies of textiles and fabrics. Yes, they still comprise composites, glass, plastic, and aluminium, but the textile addition is giving them a more stylish and playful look. The cloth isn’t just a great accessory, but actually protects the gadgets for daily use at home.

Last month at an Amazon hardware event in Seattle, the online retail giant announced an array of connected products for the home. Among its 14 new products and 70 product updates (features/software) are smart speakers the Echo Plus and Echo Dot, both of which are now covered in textiles colored heather gray, sandstone, or charcoal-grey. This gives the gadgets, which also sport rounded edges, a less hard techy look and feel. Also looking softer is the new Amazon gismo, the Echo Sub speaker.

Devices for Google Home’s range are also embracing the new aesthetic. The smart speaker by Ikea has a cloth-covered front and the hard exterior of the HomePod by Apple has been replaced with a fabric facade.

This shouldn’t come as a surprise really since the grilles of speakers have long been made from cloth. Manufacturers of smart speakers have just upped the ante and used the idea more creatively. Of late, other gadgets are also displaying the trend. Check out the new PCs and Surface tablets such as the latest Surface Laptop and Surface Go. The fabric used around the keyboard comprises a type of suede-like fabric giving it a much more comfortable wrist rest. The Spire Health Tag, a wearable fitness tracker, features a soft exterior of ultrasuede instead of typical hard plastic, which is so much more flexible and comfortable given that the device is worn against the skin.

Even if you stretch your imagination, you won’t be prepared for this cloth-treated product… a home printer! The latest smart home printer, the $199 Tango X by HP, is “wrapped” in charcoal linen, cork currant, and indigo linen. This soft material wrap gives the white gadget a pop of color that can coordinate with home décor. Printers have always been among the most unattractive desktop hardware there is, but now HP’s new covered printer, which is app-controlled and connected via Wi-Fi, resembles a big book rather than a little printer, blending in with an office shelf or bookcase. HP has also released a leather-bound laptop, which makes a traditional piece of tech look like a book rather than a gadget when not in use. When it is, it has added style and comfort.

The overall trend to encase gadgets with textiles is part of a wider trend to design products that are tailored to blend in with our everyday lives and the stylish interiors of our homes. Another excellent example is Samsung’s Frame TVs, which has a screen that masquerades as a large picture or art frame when it’s not being used. A few years back the trend was for all gadgets to be white and shiny. Now textiles are receiving a creative and softer touch. It’s exciting to wonder where the next big trend in consumer hardware design will lead us.