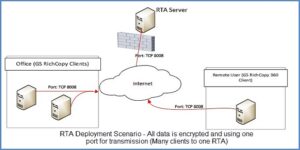 Some file management tasks such as duplication and copying of files play a pivotal role in some IT businesses. In some of the IT businesses, there will be some instances where a major number of files need to be backed up and stored separately for any unforeseen situations. Hence, there rises a demand for software tools which can be used to perform these actions at the most market demanding factors. There are critical factors that need to be considered in such software tools such as speed, file names and paths along with auditing of those files to check their integrity.

With such a demand for replication software tools present in the market, one of my recent business acquaintances while browsing social media, a data management software developer has really drawn my attention with one of their software tool that exactly meets this market requirement. Even though it is a new start up, the company has in its portfolio offering one file copying software that is used for data migration, data synchronization, replication and some other features.

With such amazing software with extraordinary features, the company has a mission statement that reads, ‘To provide enterprise class solutions to businesses of all sizes by making their products affordable.’

Having such advantageous software in the portfolio for any company offers it an extremely benefiting position in the market, where it can observe the market competition, learn the pricing strategies of other competing companies and attain the market leading position. The simple hidden strategy that this company has benefited from is by offering to the market something that until now has not been provided by any other in the market, and hence is in a position to charge whatever the company desires to.

However, the company has truly impressed the market by providing such a market demanding software tool at the most affordable price, which clearly shows that the company is true in its mission statement and that it follows so in each and every of its steps.

On the test run of the GS Rich Copy 360 Enterprise

After subscribing to the copy of GS Rich Copy 360 Enterprise version and on the test run, at no surprise, let alone the speed and performance of the product, the rest of the features were also at superior standards.

The following were the key features that we have observed in the product:

1. Ability to copy open files – Using this feature, the user can perform back up of the Outlook PSTs and other similar files that are open constantly and locked by other programs.

2. Copy NTFS permissions – The most advantageous feature in any enterprise environment is to avoid the necessity to recreate the permissions on data after having copied the data.

3. Multi-threading – Better copying functionality at much faster speeds than the normal copying methods.

4. Run as a service – This feature enables the copying to run on the background even when the user is not logged in.

5. Email notification – The users can avoid waiting at the system glaring at the screen waiting for the copying process to be completed.

It is most evident to any person relevant to the industry that the features of this product when compared to any other similar product of another enterprise company that the GS Richcopy of GuruSquad offers the most advantageous features than its counterparts. Even though there are some products with some similar features, they are notable available at far higher prices than the GS Rich copy in the market.

After analysing the company’s mission statement, their rich software with the most attractive features and affordable prices, it can be observed that the end user is receiving the best product in the market at the most reasonable prices.

So, we strongly recommend to any of you with the requirements of huge copying jobs and backing up jobs, to try this product by subscribing to its trial version, and you will find yourself amazed at the performance of the product at such a minimal price. Once you are impressed with the performance of the product, you will have to go for the complete product and that would be your decision.

6 Delicious Seafood With a Promise of Good Health

5 Interesting Ways to Make a Living Out of Instagram Today