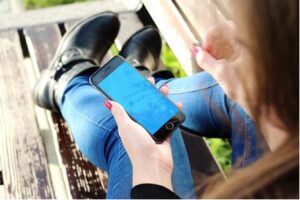 Tired of having a slug-slow phone? Believe it or not, removing one or two apps can make program-finding faster and make your phone feel faster.

There’s a lot more stuff you can do to speed your phone up even more. (Which can even boost your productivity!)

My spouse’s nephew comes over to the house to sleep over for the weekend. He’s a cute little boy, about 7 years old. Sadly, he’s been diagnosed with ADD. Although, he has a loving family that supports him.

Except… He has a tendency to do things without asking for them.

Like opening up her auntie’s phone and downloading games on it. (A lot of games.)

Whether you have a cute little “tyrant” of your own who does the exact same thing, or you’re just the type of person who forgets to delete apps once they’ve outlived their usefulness…

…is the best way to free up space on your smartphone. You’d be surprised how many people virtually become packrats or “app hoarders.” It’s easy to see why: cleaning up your smartphone is like packing up your home and sending it to the recycling factory/garbage bin. It’s hard to clean up, but it has to be done.

Here’s how you do that:

How often have you downloaded an app, only to have 2 or 3 apps that you didn’t ask for… tag along? What’s worse is this: sometimes these annoying pests cannot be deleted. They’re pre-downloaded. They’re annoying, they’re useless, let’s get rid of them.

…And they can’t be deleted*. BUT! But, thankfully, they can be disabled. Here’s how to do it

· Select what you want to disable… and press “Disable”

*They can be deleted, but are directly tied into your phone’s ability to update. If you’re willing to risk that, by all means go right ahead and delete, delete, delete!

Same as the apps themselves, deleting your app cache helps turn your slow-as-a-snail smartphone on the right way towards becoming a metaphorical panther.

It’s similar to cookies on web browsers: every single time you’ve checked in or used that app… Fragments of data are stored on the phone. Over time (if you don’t clear things up)… you’re just slowing things down. ESPECIALLY if you aren’t even using those apps anymore! So why leave traces and fragments of them?

Sure, those live wallpapers are nifty and dandy and awesome. (Did you see the one with the kitten that waves at you and “smiles”? It’s the cutest thing!) Unfortunately, these babies come with a price: they slow down your performance.

If you’re like me, this is unacceptable. I’ve never sacrificed performance for graphics – heck, even my Windows 8.1 laptop (Acer V5) is set to optimise performance over graphics. And this puppy can handle a lot – gaming-wise, no, but it can hold Adobe Flash CC6 and Sony Vegas Pro 13 at the same time with little to no performance issues.

Personally, I’ve never favoured “looking good.” Performing well always took precedence. That’s why I had no problem getting rid of my live wallpaper about a minute after I installed it. Just wasn’t worth it. (They aren’t, if you want Smartphone to run smooth-as-silk.)

As nice as transition animations are (whenever you come back to the home screen or roll around the app drawer), these slow down your phone tremendously. ESPECIALLY compared to the phone just redrawing the blank screen instantly. There’s no choice to think about, is there? Un-animated is the way to go.

To do just that…

Navigate to “About” > tap “Build” number 7 times (you’ll be told that Developer Mode is enabled.)

Navigate to Developer Options (only appears after you’ve enabled Developer Mode, so make sure you did!)

Go to “Window animations” > Set “Animations” to off.

Go to “Transition animation” and “Animation duration” and set both to off.

Presto! Animations be gone; fast-as-Panther quick performance is now yours.

More often than not, your Android needs an update. It probably does – because this is a world of technology, and technology needs to be kept in check and updated frequently.

Chances are, your Android phone is being sluggish because you haven’t been updating it as often as these updates roll out. It’s understandable, since they take a lot of time, happen frequently, and are pretty easy to ignore.

Guess what? Those “pesky” updates are what keeps your phone in tip-top shape; removing bugs and software issues, upgrading your firmware to handle more of today’s onslaught of progress. Updates are a necessary evil.

Sadly, if none of the above works, we’ve hit the bottom of the barrel. Worse comes to worse, what you’ll have to do is reset factory settings.

How do you do that?

Tip: Leave your WiFi on. When you’re creating a backup, saving your backup to Cloud Servers (such as Google Drive, Dropbox, and more)… is a smart thing to do. Like building a porch by setting the foundation first – if anything goes wrong, at least you have your foundation there. Cloud also stores passwords and what not so you don’t have to enter it manually, each and every single time.

From here, go to “Factory Data Reset” and simply follow the prompts. You’re now on your way to performing a FULL wipe and OS reinstall. This reset wipes internal storage. So make sure you HAVE everything important backed up.

Allow your phone to restart and do its thing, then reconfigure your apps’ settings.

After you’ve tried all these tactics… almost “magically”, your phone will feel like it’s just-out-of-the-box brand-new! However, be sure to never restore your factory settings from backups. Why? Because then you’ll re-introduce the problems you had in the first place.

It’s important to follow these tips to have a faster Smartphone. The only way to do that is do what I’m telling you, and put endless searches about “how to make smartphones faster”… to a standstill.

It’s the equivalent of an overweight man who merely reads about the benefits of burpees… without actually doing burpees. Sorry, but you aren’t going to lose weight that way. Same as you aren’t going to boost speeds and increase performance times without using the tips I’ve laid down for you.